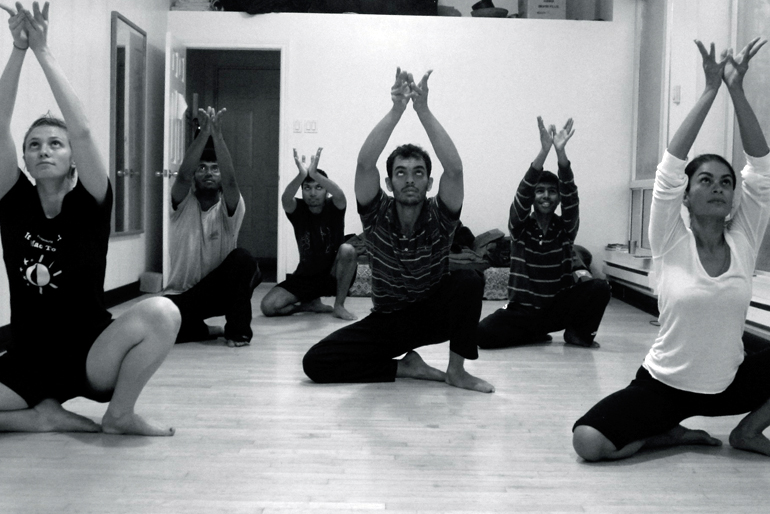 Yoga is a scientific system of physical and mental practices that originated in India more than three thousand years ago. Its purpose is to help each one of us achieve our highest potential and to experience enduring health and happiness. With Yoga, we can extend our healthy, productive years far beyond the accepted norm and, at the same time, improve the quality of our lives.

Yoga works on so many different levels, it has great potential as an effective therapy for chronic diseases and conditions that do not respond well to conventional treatment methods. For this reason, children with Down Syndrome and other developmental disabilities who practice Yoga often surprise their parents and teachers with their quick mastery of basic motor, communicative, and cognitive skills. The same Yoga routine can help children with learning disabilities develop greater concentration, balance, and composure in their daily lives. Everyone gains some level of benefit. The only requirements are proper instruction and regular practice.

The word Yoga itself means "UNION" o f the individual consciousness or Sol with the Universal consciousness or Spirit . Though many people thinking of Yoga only as physical Exercises and it is being a Religion.Yoga is not a religion.It is more of a set of techniques for us to find Spirituality.In fact Yoga is being practiced by a lot of people from different religions like Christians, Jewish, Muslims and Buddhists.

Yoga is an Exercise, away for us to keep fit. It is partly true, but if you think that Yoga is just that then you are greatly mistaken. Yoga develops the body since a weak one is a hindrance to spiritual growth. It does not simply focus on the physical but on the mental and spiritual aspects as well.

There are various paths of Yoga that lead toward this goal,each one a specialized branch of one comprehensive system

1. HATHA YOGA .(Yoga of Postures) :
It is perhaps the path of yoga you are most familiar withe since this is the most popular branch of yoga in the West.Becouse is a popular youg choice in today's fitness community. Whose higher purpose is to purify the body ,giving one awareness and control over its internal states and rendering it fit for mediation to achieve better health, as well as spirituality.

2. KARMA YOGA.(Yoga of Service) :
It is believed that your present situation is based on your past action selfless service now,without attachment to the results ,and the performance of all action with the consciousness of God as the doer .Karma yoga is change their attitude towards the good and in the process, change their souls,which leads to a change in their destiny.

3. TANTRA YOGA OR MANTRA YOGA. (Yoga of Rituals) :
Tantra yoga is centering the consicousness with through Japa (Mantra), the repetition of certain universal root-word sounds representing a particular aspect of spirit .This path aims to find what is sacred in every thing we do .Tantra yogis mudt possess certain qualities like purity, humility and devotion,dedication to is Guru ,Cosimic love, and truthfulness among other things.

4. BHAKTI YOGA.(Yoga of Devotion) :
Bhakti yoga id the path most followed in India. This is th path of the heart and devotion .All surrendering devotion through which one stives to see and love the divinity in every creature and in everything.Bhakti yoga teaches a person to have devotion to the ONE or Brahma by developing a person's love and acceptance for all things.

5. JNANA YOGA OR GYANA YOGA.(Yoga of the Mind) :
The path of the yoga that basically deals withe the mind ,it focuses on man's intelligence. Since they aim to knowledge ,they are open to other philosophies and religion for thy believe that an open and ration mind is crucial in knowing to achieve spiritual liberation.

6. RAJA YOGA.(Yoga of the Self-Control) :
The Royal or Highest path of yoga is considered to be the King of the yoga and thid be du to the fact that most of practitioner are members of religious and spiritual orders. At the heat of the Raja yoga system, balancing and unifying these various approaches,is the practice of definite, scientific methods of meditation that enable one to perceive,from the every beginning of one's efforts, glimpses of the ultimate goal.If you wish to learn discipline,then Raja yoga would perfectly suit that need .

Yoga really does help in improving your health for stretching can tone your muscles and exercise your spine and your entire skeletal system. yoga help your mental and spiritual all so.

Mother of all Martial Arts originate from Kerala